On stage at the Kestner Gesellschaft in Hannover, the Display Concentrates on the Bauhaus, on the occasion of its 100th anniversary.

Flos is pleased to collaborate with Michael Anastassaides and Polish-British artist Goshka Macuga for the spectacular installation of String Lights that’s featured in Macuga’s solo exhibition ‘Stairway to Nowhere’. On stage at leading art association Kestner Gesellschaft in Hannover, this exhibition concentrates on the Bauhaus, the influential school of art, architecture, and design, on the occasion of its 100th anniversary. 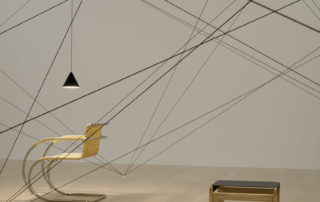 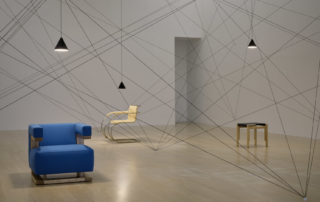 Installations, sculptures, fabrics, and collages from Goshka Macuga are on view throughout the building. The artist has also collaborated with lighting designer Michael Anastassiades to create new works specifically for this display. Anastassiades’ designs frequently emphasize the interaction and dialogue between design and its own spatial and social surrounding. In accordance with the idea, he has developed a mild installation that derives from Oskar Schlemmer’s”Figur und Raumlineatur” (1924). In this drawing, Schlemmer analysed the dualism between the two-dimensional canvas and a three-dimensional theatre space and the chances of moving within this space. The mild installation is based on String Light, a design developed for Flos in 2014, which can be expanded to encompass the whole exhibition hall. The focal point of the piece, which gives the feeling of a pencil line drawn through the space, are the three chairs of directors of the Bauhaus – Walter Gropius, Hannes Meyer and Ludwig Mies van der Rohe.

Michael has also worked at another lighting installation featuring Arrangements, a design developed for Flos in 2018, here configurated as a massive glowing curtain. Throughout the figure of Anastassiades, whose works reflect the interface between design and art, Macuga pursues the principles of collaboration and interdisciplinarity, which play a major part in their practice, but were also constitutive for the historic Bauhaus.

While today the Bauhaus is perceived as a coherent entity, as a brand of clear design, Macuga attempts to artistically demonstrate the changing ideological positioning and political instrumentalization of the Bauhaus in a historical and present-day standpoint.

She lives and works in London, where she graduated in the Central Saint Martins School of Art and Goldsmiths College. Her works are exhibited in a Lot of institutions in Germany and internationally, including the Neues Museum in Nuremberg (2018), Hamburger Bahnhof in Berlin (2018), Witte de With in Rotterdam (2017), Fondazione Prada in Milan (2016), the New Museum in New York (2016), Schinkel Pavillon in Berlin (2016), Documenta 13 (2012), and the Venice Biennale (2009).